What is Confirmation Bias

Confirmation bias tends to occur because existing information has been stored in our sub-conscious memory – which is difficult to over-write. In some way, it’s a bit like uploading an image onto the internet. Once it’s out there, it’s difficult to remove it.

Confirmation bias is also driven by ego and self-esteem. After all, nobody wants to acknowledge that they were ignorant enough to have believed in something for years or decades. For example, this might be something like the world is flat or the moon is made from cheese. If you have believed something for so long, it is embarrassing to admit you were wrong all along.

We have two parts of our brain, our sub-consciousness, and our consciousness. Our consciousness is the active thinking we do. For instance, when we process information and learn about new things.

By contrast, our sub-consciousness is the core memory hub that our brain uses to speed up our processing. In other words, it’s the information we have learned. It is stored there so we don’t have to use our mental capacity to consciously think every time we do something.

If we think about typing, walking, or talking, we had to use the conscious part of our brain to learn them. However, once learned, it becomes second nature. That’s when it is stored in our subconscious – where we don’t even need to ‘think’ about it. This includes us remembering the route to work, the journey to school, or the usual way we greet someone on the phone.

Simply put, the sub-consciousness is a shortcut that our brain uses to access information that has been previously stored. In turn, it leaves a greater ‘processing capacity’ to concentrate on other tasks. 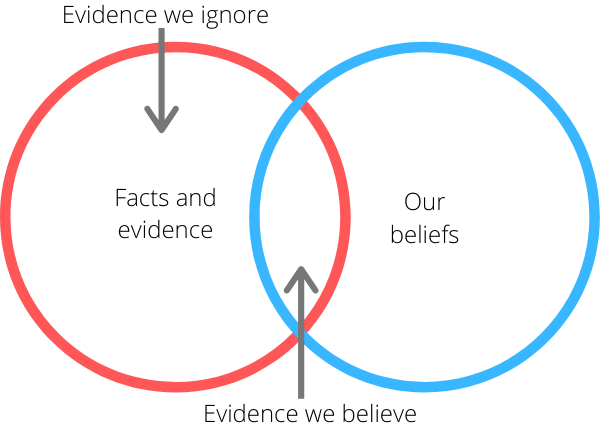 How this creates Confirmation Bias

As we grow up, we take in information. We learn to walk, to run, to talk, to write. There are also other factors that we don’t consciously learn. For instance, someone may have grown up in a very conservative household. So their views get shaped from a conservative point of view. So issues such as tax, immigration, and healthcare may be skewed towards their upbringing and environment.

Political beliefs may be very skewed as a result. For instance, unrestricted immigration may be seen as a bad thing. If we are taught that point of view from a young age, those views can get stored deep into our sub-consciousness.

These can get shaped through adulthood, but are generally fully formed into an individual’s mid-20s. After this point, our views have generally formed and are difficult to erase from our subconscious. As a result, confirmation bias can occur.

Political views or other beliefs have developed throughout our life. So when we see the information that contradicts these beliefs, we tend to reject them. They cannot be accepted because the information already stored in our brain is wrong. That would require the subconscious information to be erased before the new information can be processed. Instead, it is far easier to reject new information and confirm the status quo, therefore resulting in confirmation bias.

Confirmation bias occurs when people ignore new information that contradicts existing beliefs. For example, voters will ignore information from news broadcasters than contradicts their existing views. This leads to many on the left only watching CNN, whilst those of the right stick to Fox. Other examples include eye witness accounts, religion, and social media.

Politics is naturally divisive, with voting habits notoriously hard to break. In the US for example, states are usually referred to as ‘Red’ or ‘Blue’, depending on whether they are Republican or Democrat. Most states stay that way for years and years.

Most people don’t change their political leanings. They will vote one way or another their whole life, although there are some ‘swing voters’ that are more open to new candidates. Yet they are in the minority as confirmation bias takes hold. 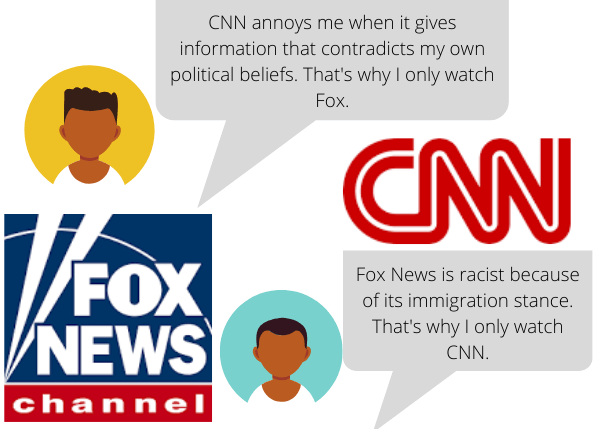 Confirmation bias also exists among politicians. We very rarely see them change their position, which is driven by confirmation bias. For example, over 100 members of Congress have rejected the notion of man-made climate change. Despite the new evidence, it is usually instantly rejected as it doesn’t conform to existing beliefs.

There are also other areas in politics such as rent controls. A large number of left-leaning politicians believe they work, even though the vast majority of economists agree (something extraordinary in itself) that they are counter-productive.

The role of eye accounts in the criminal justice system has started to make way for more accurate evidence such as DNA. In turn, many previously imprisoned individuals have been deemed innocent as DNA evidence exonerates them.

Eye accounts are notoriously problematic. We don’t often remember precise details and can be influenced by various factors. One of them is confirmation bias.

For example, there may be a witness to a homicide whereby an onlooker spots the perpetrator. The problem is that the witness and the perpetrator are siblings. In turn, the witness cannot comprehend their sibling possible of doing such a thing.

Their belief is that they are not capable of such, so, therefore, they reject the notion. It cannot be true. The new information is rejected in favour of confirming the existing belief.

Those who are religious will have a bias towards their existing beliefs. If something unexpected happens, it is a ‘miracle’. At the same time, a disaster is just a ‘test of faith’. Both seek to confirm the existing belief.

By contrast, we have those who do not have a religion. A miracle is just seen as a rare event that happens once in a lifetime and therefore doesn’t provide evidence of a higher power. At the same time, disasters such as tsunamis and hurricanes that kill thousands are seen as a justification of how a god cannot exist.

Both believers and non-believers tend to use events to justify their existing beliefs. Whether those are positive or negative events, they take an angle that re-affirms such beliefs.

There are news articles that claim ‘facts’, yet are not ‘facts’, but biased perspectives that align with the reader’s own. In turn, the unverified claims that are not supported by the evidence are seen as ‘factual’, just because they align with existing beliefs.

In turn, such news is spread across platforms, gaining more and more traction as it confirms millions of people’s existing beliefs.

How to Avoid Confirmation Bias

The first way by which we can avoid confirmation bias is to first admit that exists. Only once we are aware of when it happens can we look to address it.

In order to avoid confirmation bias, we must look at other points of view and listen to the other side of the argument. However, this must be done with an open mind.

It is also important to surround ourselves with people whose opinions differ from ourselves, even if that makes us uncomfortable. Only then will our existing ideas be challenged. However, we must also acknowledge that we do not necessarily know everything. Therefore, any new information is new knowledge which can help us understand the world around us.

With that said, the best way to avoid confirmation bias is to understand that we cannot know everything. We are only humans and only have access to a limited amount of information at any one time. In turn, it is only logical that our views should and could change over time.

Only when we become open to change and different ideas can look to avoid confirmation bias.

How do you identify confirmation bias?

Confirmation bias is where people ignore information that contradicts their existing beliefs. You can often identify it when people are unwilling to listen to new information or use that information in a way that confirms their belief.

What’s an example of confirmation bias?

How does Confirmation bias affect our thinking?

Confirmation bias makes us think inside an echo chamber, thereby restricting our ability to think outside the box. It makes it difficult for us to comprehend ideas or beliefs that are outside of our own. Therefore, it can reduce the amount of innovation and progress we make as a society.

On an individual level, it can stall career progress if we cannot adapt to new scenarios. By challenging our existing thoughts and beliefs, we are able to progress, grow our knowledge, and become more rounded individuals. Market Equilibrium Definition - Market equilibrium occurs when demand and supply meet. At this point, producers of a good are selling exactly how much…