Fiscal policy refers to the actions governments take in relation to taxation and government spending. Governments use fiscal policy to try and manage the wider economy. By increasing or reducing taxes and spending, governments look to increase or decrease the velocity of money, which can have an effect on inflation and consumer spending.

Fiscal policy is important as it affects the income consumers take home. This is because taxation is a key part of fiscal policy, so if the government decides to increase taxes, it reduces the disposable income of households. With lower levels of income, households are unable to spend as much as previous – thereby affecting demand and hence jobs in the wider economy.

Government spending is also an important part of fiscal policy. For instance, governments often use it to stimulate the economy and create jobs. It does this by borrowing now in the hope it will stimulate the economy and create a boost to tax revenues at a later date. So short-term expenditure is paid for by long-term taxation and economic growth. This may be in order to prevent a deep and damaging recession which may put millions out of work, such as what happened during the 2020 Coronavirus crisis.

Governments use fiscal policy in different ways, depending on what type of strategy is desired. Some look to boost the wider economy through an expansionary policy, at the cost to the taxpayer in the long-run. Others may look to just balance the books through a neutral policy. Whilst others look to save in the short-term to keep the finances in check in case funds are needed in times of crisis, which would come under a contractionary policy. 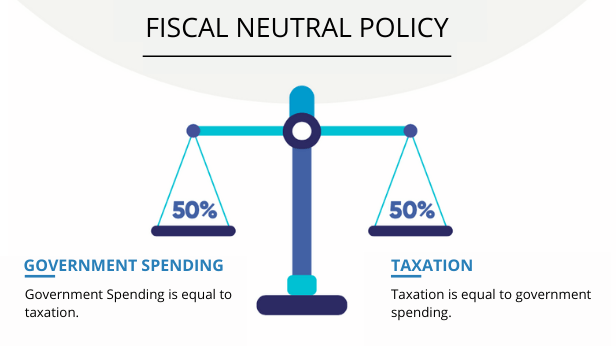 
The first type of fiscal policy is a neutral policy, which is also known as a balanced budget. This is where the government brings in enough taxation to pay for its expenditures. In other words, government spending equals taxation.

Under a neutral fiscal policy, governments are restrained on what they spend depending on what they bring in. In a similar fashion, this is what most households do. For instance, the average taxpayer is unable to spend more than they bring in — unless of course, they use credit.

With a neutral fiscal policy, it is difficult to tell how much in tax will be brought in from one year to the next. So, governments often forecast tax receipts year on year and plan accordingly. 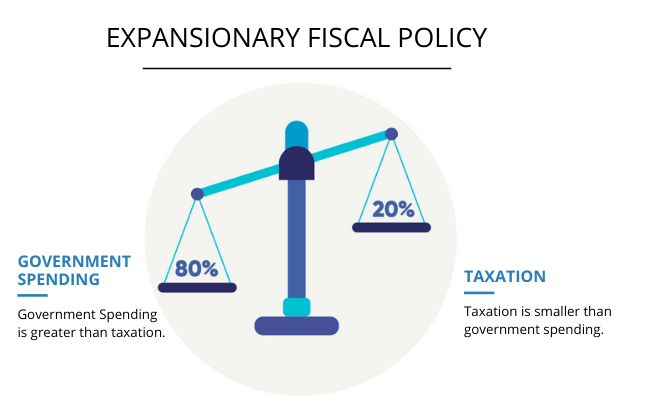 
Expansionary fiscal policy is where the government spends more than it takes in through taxes. This may involve a reduction in taxes, an increase in spending, or a mixture of both. In turn, it creates what is known as a budget or fiscal deficit.

During recessionary periods, a budget deficit naturally forms. This is because unemployment tends to increase, meaning lower income from tax receipts which generally account for half of governments revenue.

Expansionary fiscal policy uses lower taxes and/or higher spending to ultimately boost prosperity and economic growth. By reducing taxes, consumers have more money in their pockets to go out, spend, and stimulate the economy.

At the same time, higher govemment spending can boost aggregate demand. If it undertakes an investment project, it can create many new jobs. Jobs for people that would otherwise be unemployed. In turn, these employees will have more money to spend, thereby stimulating the economy. 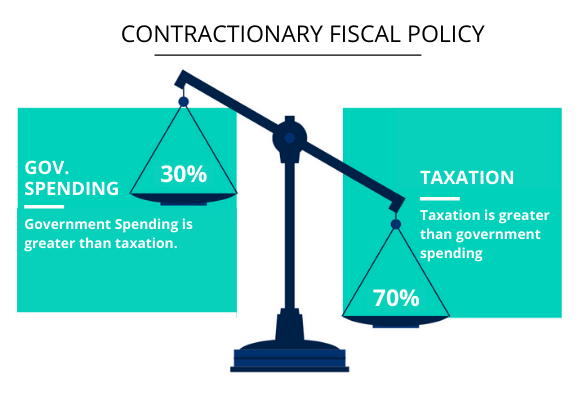 Contractionary fiscal policy is where government collects more in taxes than it spends. A government may wish to do this for several reasons. primarily, it is used to help stem inflation. For instance, the more governments tax, the less disposable income consumers have. In turn, this reduces aggregate demand which may seem like a bad thing, but it helps reduces inflation.

So a contractionary fiscal policy will take money away from consumers. Consequently, they demand less from individual businesses. This then sends a signal to those businesses that demand is starting to decline. So they stop raising prices so quickly, thereby reducing the rate of inflation.

With that said, governments may wish to impose a contractionary policy in order to reduce or control their debt. Although we have discussed lower taxation, governments can also resort to lower spending: otherwise known as austerity to do so.

We have seen in countries such as Greece, Spain, and Italy a level of spending that was unsustainable. As a result, it had to undertake a contractionary fiscal policy in order to meet its debt payments. What made this so painful was that their economies were going through one of the worse recessions in history.

So in summary, a contractionary fiscal policy would aim to either reduce inflation or, reduce government debt.

There are three types of fiscal policy; neutral, expansionary, and contractionary.

Fiscal policy is set by central government. This should not be confused with monetary policy that is decided upon by the central bank, and NOT government.

ETF Definition - Exchange-traded funds, known as ETFs, is an investment fund which offers shares on the stock-market. Generally, ETFs specialize in indexes… … Opportunity Cost Definition - Opportunity cost is the cost of taking one decision over another. That can come in the form of time, money,… … Microeconomics Definition - Microeconomics is a study within economics that looks specifically at the behavior of individuals and firms. When considering limited resources,… …