Porters 5 forces was originally coined by Harvard Professor, Michael E Porter – with his framework published in the Harvard Business Review in 1979.

The framework is designed to apply to specific parts of the economy – for instance, supermarkets. By applying Porters 5 forces, both existing firms and new entrants can develop a strategic understanding to assist with their profitability. Essentially, the weaker the forces, the greater the opportunity for high profits.

With that said, let us now look more closely at the model below and how it helps companies do such. 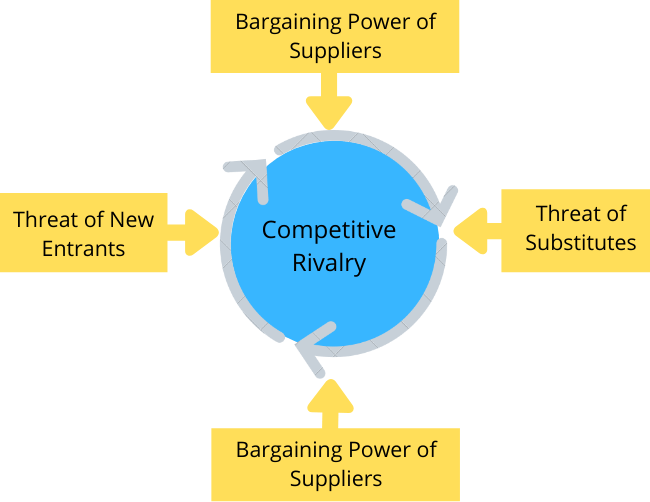 The threat of substitutes cannot be underestimated. There are firms that have a strong market position with its own market – perhaps even a monopoly. The potential for new entrants is high, bargaining power of buyers and suppliers is low and there is no competitive rivalry.

In fact, this is the epitome of a monopoly – it has unrivaled market power both up and down the supply chain. Yet it can still face a significant threat of substitutes. Coca-Cola for instance has been facing increasing pressure from low-sugar beverages – taking away more health-conscious consumers.

The variety of flavoured waters and juices has increased substantially – putting pressure on Coca-Cola to evolve. Whilst it dominates the soft drinks market, it was losing revenue to healthier options such as smoothies and low-sugar juices.

Whilst Coca-Cola is not a monopoly, most of the other forces do not apply – which makes the threat of substitutes such a key strategic point. In fact, it is one that has not gone unnoticed by the company. It has expanded its product offerings from Coca Cola Life, to Plus to Diet, to Zero sugar. Each with a slightly different option for the health-conscious.

For businesses that have a strong market position, the threat of substitutes perhaps one of the most important issues. This is because the other four forces tend to be less of a factor in markets where there is a condense concentration of competition.

The threat of new entrants refers to how easy it is to enter and leave the market. These are also known as barriers to entry and exit. The easier it is for new companies to enter, the more likely new entrants will come in and try to exploit a new part of the market.

It is an unfavourable position for any company to be in. However, it can help incumbent firms ensure they are pro-active with new product offerings and designs. Yet no company would choose to have low barriers to entry.

To explain, there are six main areas that reduce the threat of new entrants and create significant barriers to entry. There are many more factors that contribute, but these are the main ones:

Economies of scale allow businesses to reduce their unit prices as it grows bigger and achieves efficiency gains. When there are already big players in the market with huge cost advantages, it makes it difficult for new entrants to compete. New businesses don’t have the same resources of efficiencies to compete on price – thereby presenting a huge barrier to entry.

If we take an example – few supermarkets can match Walmart’s economies of scale, which allow it to sell at extraordinarily low prices. As such, it presents a huge barrier to entry and reduces the threat of new entrants.

Brand image is another difficult obstacle to overcome for new entrants. Once an image is established, it is difficult to take business away from what is an extremely trusted business. Coca-Cola for instance universally popular – even Pepsi has had trouble bringing Coca-Cola down. Trying to compete against such a brand is almost impossible and significantly deters new entrants.

In industries such as oil and gas extraction, or even banking – there are significant start-up costs. Potential new entrants require millions just to get started. Even then, success is not guaranteed – which makes it extremely difficult to obtain financial backing. New entrants are therefore limited to an existing business that has significant levels of capital and is looking to diversify into new industries.

Technology and specific industry expertise can prove invaluable to new entrants – but also present them with a huge barrier to overcome. Creating a new airline business for instance involves a significant level of industry knowledge.

In some industries, the first company to enter the market successfully obtains a favourable position. It is the first to establish a brand presence and therefore obtain great power in the market – take Amazon, Apple, or McDonald’s for example.

We also have the power of established firms that will look to swiftly out-compete new firms. It may do so by artificially lowering prices – also known as ‘predatory pricing’. Alternatively, it may vertically integrate so that it controls part of the supply chain and can, therefore, pass on lower prices to the consumer.

The buyer can refuse to buy, yet the seller can’t afford to refuse the sale. As a result, the buyer has significant power to dictate the price they are willing to pay – else they will take their business elsewhere.

The power of buyers allows them to dictate price, supply, and quality. Some of the factors that contribute to this are:

Suppliers can exert their power by raising prices, reducing quality, or restricting supply – thereby extracting profitability from the buyer. They can become even more powerful if this power extends down the supply chain. For instance, a manufacturer may have power over the retailer who in turn has power over consumers. What we see as a result is the costs being passed on through the chain.

There are a number of factors that can lead to such power by suppliers – they include:

Competitive rivalry is where the existing competition uses tactics such as price competition, product introduction, and advertising campaigns. This intense rivalry puts pressure on new and existing firms to reduce prices and compete more aggressively. As a result, existing firms will start to see profitability fall as they jockey for position – trying to attract customers.

There are several factors that contribute to competitive rivalry, they include:

Starbucks faces strong competition from the likes of Dunkin Donuts, Costa Coffee, Tim Hortons, as well as thousands of other small independent stores. These small stores offer great local competition and offer an alternative for customers.

It means the criteria as there are many options for consumers, there are low switching costs, and there are a variety of product offerings from competitors.

The vast number of coffee shops allows the buyer (consumer) to exert bargaining power. There are many competitors in the market and the offerings are very standard – there is only so much you do to differentiate coffee. Consumers can go to competitors knowing the quality of coffee is going to be relatively the same wherever they go.

We see strong power of the buyers not only because they have a great level of choice, but also because there is little differentiation in that choice. Yes, some may argue Dunkin’s coffee is better, but raise the price by 50 cents and the answer may be different.

Another criterion that creates strong power for buyers is the elasticity of demand. In other words, how do price changes affect consumer demand? With regards to Starbucks, its coffee is elastic – meaning a change in price will significantly affect demand. One of the reasons being that there are many other alternatives, but also because coffee isn’t an absolute necessity. Consumers will just go without coffee if it becomes too expensive – or just make it at home.

Starbucks sources coffee beans and machines as well as a number of other ingredients. When it comes to suppliers, it has a strong position because it buys significant quantities in bulk. It is a big consumer for most of its suppliers, whilst Starbucks has the option of going with thousands of other suppliers.

The difference in options and buying power creates a weak negotiating position for suppliers. Even though there are thousands of other coffee shops – none have the same buying power as Starbucks. So a supplier may get custom elsewhere, but will not get the same quantity of orders – putting pressure on its fixed and unit costs.

In its very basic form, Starbucks offers consumers a drink. There are hundreds of substitutes that offer consumers the exact same thing. It could be a bottle of water, a Coca-Cola, or fresh orange juice. The options are almost endless.

This presence of substitutes places a limit on the price that Starbucks can charge – else consumers will go elsewhere. Starbucks has to offer something different to attract customers and it does so through its atmosphere – although many other coffee houses are now following a similar formula. In turn, this puts pressure on its earnings as its unique selling point becomes weakened.

In terms of the overall threat of substitution, there are thousands of other products for consumers to choose from – which puts great pressure on Starbucks to price competitively. At the same time, substitute goods in the drinks market are always evolving with new flavours and types – particularly in the health market. This might be something for Starbucks to consider and potentially expand its product offering.

The vast array of coffee shops in existence is enough to put off new entrants – although it won’t necessarily stop some from trying. Nevertheless, most new entrants won’t have the same level of economies of scale as Starbucks, so will struggle to compete from a financial point of view. Income Effect Definition - The income effect is where a change in income has a subsequent effect on demand. In other words, as consumers… Neoliberalism Definition - Neoliberalism refers to the resurgence of free market ideas that characterized classical liberalism in the 19th century. It is based… Externalities Definition - In economics, an externality refers to a cost or benefit that is imposed onto a third party. These can come…