What is a Business Cycle

Causes of the Business Cycle

How do Business Cycle’s work

What is a Business Cycle

The business cycle refers to the transition between economic growth and contraction. This is where a nation experiences a growth in economic activity followed by a decline. In other words, the nation goes from producing more and more goods and services, to producing less and less.

The business cycle centres around Gross Domestic Product and its relative growth or decline. The cycle has an upward trend, and is made up of periods of economic expansions and recessions. Yet despite the term ‘cycle’, there is nothing periodic about it. Economic expansions could occur for 5 years, 10 years, or 15. There is no set trend to tell how long a business cycle will take.

It is also known as the boom and bust cycle, the economic cycle, or the trade cycle.

Causes of the Business Cycle

Okay, so the business cycle refers to the ups and downs of economic growth. However, what causes this to happen? Can’t the economy just maintain constant growth? Well it is quite a complex matter and is best explained through fluctuations in aggregate demand. Essentially, this is when the population as a whole starts to buy fewer goods and services. 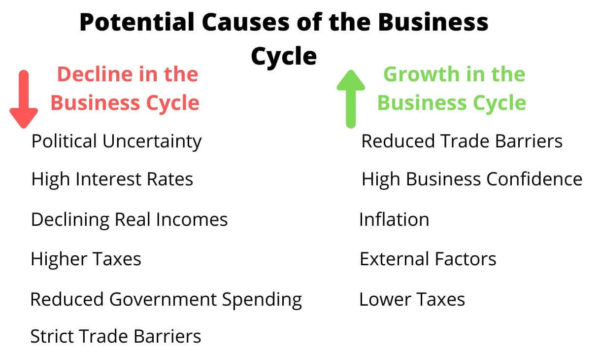 The decline may never actually happen unless a nationwide fall in demand happens. Some factors that can cause a decline in aggregate demand include: higher interest rates, stricter trade barriers, declining real incomes, reduced government spending, higher taxes, and political uncertainty.

Let’s look at the causes of the business cycle below.

There are also more extreme cases such as political and civil unrest. For example, the 2019 Venezuelan Presidential election led to civil unrest following years of hyperinflation and economic mismanagement. This not only reduces the amount of domestic investment but also foreign direct investment. This contributed to Venezuela’s decline back into the business cycle contraction after rapid growth following the 2008 Financial crisis.

High-interest rates make it more difficult for businesses to invest. For instance, a small store that is just starting is going to find it hard to make repayments at an interest rate of 20 or 30 percent. It also sucks out money from the economy and re-directs it to the banks. As the interest rates are so high, businesses and consumers reduce their demand for credit. In turn, there is a contraction in the money supply which can lead to deflation.

The effects of high interest rates can be dire if not managed correctly and subtly by central banks. If the interest rates are increased too fast, too high, and too rapidly, we will see the aforementioned effects such as lower business investment and deflation. Therefore, it can contribute to a transition towards an economic contraction in the business cycle.

Inflation can create a drain on consumer incomes as it decreases its value year on year. Therefore, if firms do not increase wages in line with inflation, the average worker will be able to afford less than before.

If real incomes decline, it means consumers have less income to spend on goods and services in the economy. In turn, a prolonged period of decline in real incomes can contribute to an economic contraction in the business cycle.

Higher taxes mean the average consumer has less disposable income, which can contribute to a decline in consumption. Consequently, as consumers demand fewer goods, the overall economy can slide into the contraction phase of the business cycle.

With consumers spending less, there is less demand for goods and services. In turn, the need for businesses to employ as many workers also declines, meaning an increase in employment. We then have a potential downwards spiral by which lower consumer demand leads to unemployment, which leads to a further reduction in demand.

These are only potential effects and depend on how extreme the tax rises are for and who they are placed on. It also depends on how the taxes are spent. For instance, they may be used to re-distribute to the poorer in society. This may offset some of the negative effects as lower-income households tend to spend a higher proportion of their incomes, thereby stimulating consumer demand.

However, they may be used to repay government debt. In which case, there is likely to be a deflationary effect that could create further problems.

As governments reduce spending, it can create a contractionary effect on the business cycle. However, it depends if it is also aligned with a decrease in taxation and whether the savings are spent in reducing debt.

If the government reduces spending to pay off its debt, it can create a trough in the business cycle. This is because the government is still taking the same revenues from the public. There is a negative effect as the government spends less, which is a component of GDP, therefore contributing to a contraction. However, there is a positive effect. If they are paying off debt, this increases the amount of credit available to the rest of the economy. So it may make it easier for businesses to obtain credit to expand their investment

When business confidence is high, they are more likely to spend and invest. Therefore, we see an expansion in the business cycle.

Business confidence may increase because of growing consumer demand, or a reduction in uncertainty. In turn, businesses are more likely to invest as they anticipate further demand in the future.

If the productivity of the economy on the whole increases, it means fewer resources are needed to produce the same level of output. This makes it cheaper to produce goods, meaning lower prices can be afforded. In turn, these savings are passed on into the wider economy. Whether this is through lower prices to the consumer or higher profits to businesses.

What this does is create more funds for consumers and businesses to spend elsewhere. In turn, this increases consumer demand and business investment in the long run.

As countries start to reduce trade barriers, we see cheaper consumer goods coming in. This acts in a similar way to productivity gains in the fact that goods can become cheaper to the consumer.

As cheaper goods come into the country, consumers have more disposable income to spend on other goods. This means greater demand elsewhere in the economy, which can stimulate employment and push the economy into the expansion phase in the business cycle.

How do Business Cycle’s work

So business cycles occur through increases and decreases in economic output, which are largely a result of fluctuations in aggregate demand. However, how does the cycle work? The whole process works through 4 phases: expansion, peak, contraction, and trough. This is otherwise known as the 4 phases of the business cycle. Moving to the next stage, there is a contraction whereby fewer goods and services are being demanded. Then, the economy goes into a trough. Aggregate demand may slowly decline, but very slowly. This will occur until the economy picks up back into the expansion phase.

In the business cycle, there are 4 phases – expansion, peak, contraction, and trough. This cycles through periods of economic growth and back into economic rececsion.

One of the key questions asked is how long there is between phases. A legitimate question seeing as the graph illustrates a repetitive trend. However, to answer the question; there is no set trend between phases. An expansion may last 2 years or 20 years. It depends on the behaviour of the whole population and how that translates into aggregate demand.

With that said, let us look at the 4 phases now:

Otherwise known as a ‘boom’ or economic growth. This phase of the economic cycle occurs when aggregate demand is increasing. In other words, the population as a whole is demanding more goods and services and businesses are providing them.

During this phase, employment and business profits tend to increase. The nation as a whole tends to prosper, confidence is high, businesses invest, and this stimulated further economic growth.

As economic growth slows, this is what is known as the peak of the cycle. Employment levels remain stable and the economy is reliant on productivity growth to stimulate output. Business investment starts to stagnant as the growth of future demand starts to diminish.

Businesses will still continue to invest, but on a nationwide scale, there is stagnation. What results is a limited economic movement.

Once aggregate demand starts to fall, we enter into the contraction phase. This is otherwise known as a recession, which we associate with declining employment, business investment, and consumer confidence. Jobs are lost and the overall demand for goods and services is harmed as a result.

During this phase, the economy has suffered the worst of the decline. Economic growth remains stagnant, with aggregate demand failing to pick up.

Central banks respond by trying to reduce interest rates or ‘printing’ new money. The aim is to stimulate demand in the economy. For example, if interest rates are lower, it means both businesses and consumers have lower repayment costs; allowing them to spend on other goods. Income Effect Definition - The income effect is where a change in income has a subsequent effect on demand. In other words, as consumers… …

Foreign Direct Investment (FDI) Definition - A foreign direct investment (FDI) is where an individual or business from one nation, invests in another. This could be… …