2.3 Ownership of a key resource

3. Difference between Monopoly and Monopolistic Competition

3 Types and 7 Causes of Monopoly’s

What is a Monopoly

When looking at the causes of monopoly, it is important to first define what it is. The term monopoly originates from the Ancient Greek language. Monos, meaning “sole”. And Poleo, meaning “sell”. Roughly translated, it means “Sole Seller”. Any person or business who is the only seller in the market could be classified as having a monopoly.

One type of monopoly is the natural monopoly, which is called ‘natural’ because there is no direct government involvement. This derives from the fact that its creation originates from variables that are not man-made.

For instance, railways are a prime example of a natural monopoly. This is because the cost to build another track would be over and above what a competitor would make back in profit.

Utilities are another example. To build new sewers or power lines would be costly, inefficient, and impractical. If two companies were to build and offer separate lines, the costs would be higher than what they would be under a monopoly. Therefore, other firms do not want to enter the market because there is no profit to be made.

In short, natural monopolies exist because it is able to provide a product or service at a lower cost than a competitive market would offer. In part, this is due to the efficiencies that economies of scale offers. For instance, utilities, railways, and other such industries can offer a service or product at a price that is lower than what would be achieved if there was competition.

With more competitors, there is competition over customers and resources, which pushes up prices beyond what the customer would be willing to pay. Therefore, there would be no point in conduction business with multiple competitors.

Another type of monopoly is the state monopoly. This covers industries where the state has full ownership. Notable examples include postal services, utilities, television, and the supply of money. These are usually controlled by the state as they are deemed as ‘natural’ monopolies. In other words, the goods could only be efficiently provided under a monopoly structure. Therefore, rather than trust a private firm to run them, they are taken under government ownership instead.

The aim of state ownership is to prevent price gouging that private monopolies would participate in. As monopolies have greater power to dictate prices, they may increase the cost to the consumer over and above the market rate.

Some governments regulate these monopolies instead, but in many countries, there is a strong political will to have these controlled by the state. In the UK for example, the re-nationalization of the railways has become increasingly popular in order to reduce ticket prices.

A private firm creates a new product. This may be completely different from whatever is on the market. For example, a new medical drug, that can reverse the effects of Alzheimer’s. Nothing else is available to the consumer. So this drug has a monopoly within the market.

It is naturally occurring as it is the first and only product on the market. However, this product is given an artificial monopoly through the patent system. For a certain period of time, this will be the only product customers can buy.

Monopolies can occur due to a number of factors. Some may apply, some may not. With that said, monopolies tend to erode over time; perhaps with the exception of natural monopolies. Causes such as patents, high entry costs, or low potential profits may prevent competition today. However, they tend not to last over the long-term.

One cause of natural monopolies are barriers to entry. This is usually as a result of high costs – with railroads being a well-known example.

To build a new station and railroad would cost millions. High start-up costs are required. Potential competitors would need millions to invest and compete. Even if competitors had the required start up costs, the profits they make may never cover their fixed costs.

There are many industries that have high entry costs. For example, oil and gas are notoriously expensive to enter, with high fixed costs and a number of regulatory requirements. New companies face a tough time in an industry that is dominated by big firms in the market such as ExxonMobil and BP. High costs dis-incentivize potential competitors from entering the market. As costs are high, the financial impact of failure is that much greater. 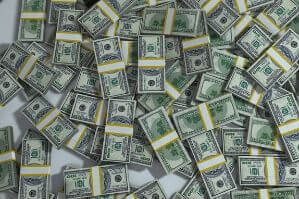 High costs dis-incentivise potential competitors from entering the market. As costs are high, the financial impact of the failure is that much greater.

Monopolies are more common in industries that have high fixed costs and steadily decreasing marginal costs. For example, if it costs $1 billion to start a new tech company, that may be considered a high fixed cost. To supply its service to one additional customer, the marginal cost may be small, perhaps $10,000.

When the company is only serving one customer, it requires them to pay a massive price to cover its costs. However, at 50,000 customers, the marginal costs fall to $50 per customer, making it cheaper to provide the service. This may keep continually falling until the marginal cost may actually reach $0.

In an industry such as that described, it is economically effective for one company to be in the market as it benefits from economies of scale. This means the more customers it is able to serve, the lower prices it can offer as the cost per customer also falls. The most efficient company may end up driving all other competitors out due to its economies of scale and lower prices; taking advantage of lower production costs and out-pricing the competition.

Potential profits are a key indicator to potential businesses. If monopolies are making small profits, it is not worth a competitor’s time and money to try and take a small share of the market.

If monopolies start making extraordinary profits, this sends a signal to potential competitors that there is profit to be made. For example, it may cost $1 billion to develop new operating software. If Microsoft only makes $200 million a year, then there is not much profit for competitors to take.

However, if Microsoft tries to take advantage of consumers and profits $1 billion each year; there may be room for competition. Companies may be able to come in, invest $1 billion, and take a share of those profits.

By contrast, when there are low profits, the monopolist’s position is maintained as competitors are dis-interested. If we look to nature as an example; a lion would not waste its effort pursuing beetles or shrew. They are too small and not worth the energy in catching.

3. Ownership of a key resource

Monopolies can arise when one business owns a key resource. These are generally physical resources, such as diamonds. For example, if there is only one diamond mine in the country, the business that owns it will be able to achieve a monopoly. This is how De Beers controlled the diamond industry throughout the 20th Century.

It controlled diamond mines in South Africa and brought up those in other nations. It managed to keep control of the diamond supply for most of the 20th Century, only collapsing once international competition became increasingly fierce.

“Monopolies can arise when one business owns a key resource. “

The National Grid in the UK is also a monopoly that has sole ownership of a key resource. It has power over the whole of the UK’s energy supply. While it is a publicly-traded company, it is held down by government regulation to prevent consumers from being in-directly overcharged.

When companies have sole ownership of a key resource, they are usually heavily regulated by government. This is so that they do not take advantage of their monopolistic position in the market.

Another cause of monopoly is when the government grants a patent to businesses. This is a form of intellectual property that gives the owner the legal right to be the sole producer of a product.

The owner of the patent must provide details of the product and make them public. In exchange, the government guarantees the protection of such rights in court for a period of time. Any business infringing on this right will be in violation of the patent and can be sued.

While this grants the inventor a monopoly, it is designed to incentivize innovation. If the inventor of a product knew there was no legal production, they may not invest the time, energy, and funds into developing it. There is little incentive for the inventor if they know the product will be copied by Mr. Bloggs the very next day. Nevertheless, it creates a monopoly on that product for a set period of time.

Import quotas, tariffs, and other trade restrictions can limit competition and be a cause of monopoly. If cheaper foreign competition is unable to enter the market, there are fewer pressures on domestic companies.

For example, when the patent of a small niche drug runs out; there may be few pharma companies that would want to compete. This may be because the drug only serves a few hundred people, so there is little profit to be made. Therefore, there is a domestic monopoly.

However, foreign drugs would be able to compete as they can access multiple national markets, which creates a larger consumer base and a greater potential for profit. By being able to access more markets, what was a niche product, becomes a large and quite a lucrative market. Yet many countries prevent this. In the US for example, only drugs approved by the FDA can enter. This stops perfectly safe drugs from Europe from coming in and serving as a competition to the domestic monopoly.

Another cause of monopoly occurs in new ‘baby markets’. During the infancy of a market, the first entrant will be able to establish an initial monopoly position. This is because they are the first company in the market, without competition.

For example, if a business was to create a hypothetical teleportation device, it would be the first to do so. In the early stages at least, it may have a monopoly until competitors are able to enter and create a similar product.

During these initial stages of a new market, it is easy for the first entrant to establish a monopoly. However, this usually does not last long as competitors see an opportunity.

Geographic monopolies can be characterised by the sole presence within a local market. For example, there may only be one restaurant in the local town. If you want a meal out, you may have to travel half an hour to the nearest restaurant. When considering the local market; it can be considered as a monopoly.

Other examples of local monopolies may include a gas station that is the only supplier on the motorway. Whilst it does not have a monopoly over gas, it does within the bounds of its location.

Difference Between Monopoly and Monopolistic Competition

It is important to distinguish the difference between a monopoly, and monopolistic power. In a monopoly there is only one supplier in the market. For example, AT&T had a US monopoly in phone services throughout most of the 20th Century. This is different from monopolistic power in a number of ways.

The difference is that monopolistic power means a company has monopoly like powers, but is not the sole provider. In monopolistic competition, there are many firms in the market, but they compete on factors other than price. Examples include: Taxi’s, Restaurants, or Hairdressing.

Monopolistic markets are also characterized by low barriers to entry; something that is usually non-existent in monopoly markets. This allows new firms to easily come in and compete; in stark contrast to monopolies. Capital Flight Definition - Capital flight occurs when investors or businesses remove their money from a country. This may be due to economic or… …