What is Foreign Direct Investment

Foreign direct investment (FDI) is where an individual or business from one nation, invests in another. This could be to start a new business or invest in an existing foreign owned business. For instance, Mr Bloggs from the US has $1 million and wants to start a new company in Germany. He invests this, creating a new clothing manufacturing firm in the country. This would classify as a FDI.

However, the definition is slightly different when it comes to investing in a foreign companies assets. According to the IMF, a foreign direct investment is where the investor purchases over a 10 percent stake in the company.

Anything under this amount is classed as part of a ‘stock portfolio’. For instance, this covers the small amount of stocks that the average citizen may have invested. Essentially, anything too small to influence any level of control of the firm.

Horizontal FDI is where funds are invested abroad in the same industry. In other words, a business invests in a foreign firm that produces similar goods. For instance Nike, a US based firm, may purchase Puma, a Germany based firm. They are both in the industry of sportswear and therefore would be classified as a form of horizontal FDI.

Vertical FDI is where an investment is made within the supply chain, but not directly in the same industry. In other words, a business invests in a foreign firm that it may supply or sell too. 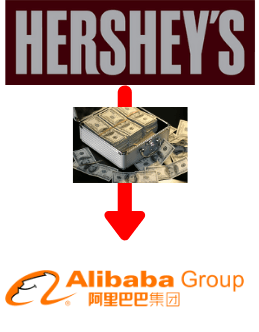 For instance, Hersheys, a US chocolate manufacturer, may look to invest in cocoa producers in Brazil. This is known as backwards vertical integration because the firm is purchasing a supplier, or potential supplier, in the supply chain.

We then have forwards vertical integration. So this is where a firm invests in a foreign company that is further along in the supply chain. For instance, Hersheys may look to purchase a share in Alibaba; where it sells its products.

Conglomerate FDI is where an investment is made in a completely different industry. In other words, it is not linked in any direct way to the investors business. For instance, Walmart, a US retailer, may invest in BMW, a German automobile manufacturer.

This may seem strange to some but offers big businesses an opportunity to expand and diversify into new areas. To explain, some big businesses come to a point where the demand for its fundamental business starts to decline. In order to survive, it must invest in new ventures. Even big businesses with strong demand may look to new industries where growth and return on investment are significantly larger.

Foreign direct investment promotes international trade as it allows production to flow to parts of the world which are more cost effective. For instance, Apple was able to conduct FDI into China to assist with the manufacturing of its products. However, many of the components are also shipped in from elsewhere, generally from the region of Asia. For instance, the camera is made by Sony, which sources its manufacturing in Taiwan. There is also the case of the flash memory, which is sourced by Toshiba in Japan. We also have the touch ID sensor which is made in Taiwan, and the chipsets and processors, which are made by Samsung in South Korea and Taiwan.

These are but a small handful of the components, but demonstrate how inter-connected the supply chain has become between countries. Both Samsung And Song have conducted investment in the likes of Taiwan, China, and Japan. As a result, it has created new jobs in the region and boosted trade between the nations.

As we have seen with the Apple example, a supply chain is created between countries. In part, this is created by the division of labor. For instance, South Korea may make the batteries, Taiwan the ID sensors, and Japan the cameras. As a result, they are all dependent on each other.

If there is a revolt in Taiwan, the whole process could fall apart. Without the ID sensors, the final product cannot be made, so the need for other components is also reduced. This means workers in Japan and South Korea are also affected.

To use a famous metaphor, you don’t bite the hand that feeds you. In other words, if nations are reliant on each other for their income, then the likelihood of war is also reduced.

3. Sharing of Technology, Knowledge, and Culture

Foreign direct investment allows the transfer of technology, knowledge, and culture. For instance, when a firm from the US invests in another from India, it has a say in how the firm is run. It is in its interest to ensure the most efficient use of its resources.

What happens as a result is that useful techniques or ways of conducting business are transferred. The members of the US company may say, have you tried doing A, B, and C?

By coming in from a different cultural background and perspective, often, efficiencies can be achieved. Furthermore, there is the case of technology. It can transfer over in a number of ways. First of all, employees benefit from having first-hand access to the new technology. They may then be able to use this to start their own ventures.

From the businesses perspective, foreign direct investment reduces risk through diversification. By investing in other nations, it spreads the companies exposure. In other words, it is not so reliant on Country A. For instance, Target derives its entire revenues from the US. Should an economic recession hit Stateside, it’s almost guaranteed to harm its profits.

By diversifying and investing in foreign markets, it allows businesses to reduce domestic exposure. So if a US firm invests in new stores in Germany, the level of risk is reduced. This is because it is not reliant on one market. Whilst there may be a decline in demand for one, there may be growth in another. To use an analogy, it’s similar to placing a bet in roulette on both red and black.

Foreign direct investments can benefit from lower labor costs. Often, businesses will off-shore production to nations abroad that offer cheaper labor. Now there is an ethical element to this than is often debated, but we will leave that aside for now. Whether it is ethical or not is irrelevant as it is a benefit to the business.

Although labor costs are lower, we must also consider productivity. For instance, one person in China may produce one unit for $1 an hour. However, an employee in the US may be able to produce 20 units for $10 an hour. So whilst a Chinese employee is cheaper, they only make 1 unit per $1, compared to 2 units per $1 in the US.

With that said, foreign direct investors will take such factors into account. And in most cases, the labor is so much cheaper than most of the productivity differentials are eliminated. This means the investment is cost-effective. In other words, more employees will be needed to make the same number of goods, but the total cost to produce is lower.

On most occasions, foreign direct investment will result in a net gain for the company. After all, it is in their interest to ensure the investment pays off. However, there are exceptions, where FDI can in fact go the other way.

Nevertheless, on the whole, FDI is generally associated with lower costs and increased cost-effectiveness.

Reduced levels of corporation tax can save big businesses billions each and every year. This is why big firms such as Apple use sophisticated techniques to off-shore money in international subsidiaries.

Countries with lower tax regimes are usually those that are favoured. Examples include Switzerland, Monaco, and Ireland, among others.

Furthermore, there are also tax incentives by which the foreign government offers tax breaks to investors in a bid to encourage FDI.

When money is invested in another country, it creates jobs, new companies, and new factories/buildings. This brings about new opportunities for local residents and can stimulate further growth.

With greater levels of employment being made available, it creates a greater level of purchasing power in the wider economy. If we couple this with the fact that big corporations often pay above the average to attract the best workers, we can see a spill-over effect.

With employees earning more money, they also create demand for other goods in the economy. In turn, this stimulates employment in other markets and industries.

One of the main fears, particularly among developing nations, is that they can essentially be brought and controlled by foreign powers. Land, labor, and capital are relatively cheap in countries such as Vietnam or Taiwan. Therefore the US or other developed nations can come in with significant sums and buy up vast sums of the country.

This is why some countries place strict restrictions on FDI. Often, investors must join a partnership with a local business in order to enter. This way there is still a level of domestic control

When significant sums of money are transferred to another, it is an investment that would have been used in the home market. Consequently, FDI may boost employment in foreign nations, but may temporarily reduce it at home.

Instead of the funds being invested in new factories and creating jobs, it is sent abroad instead.

As we have seen in the US, manufacturing jobs have been lost to the likes of Mexico, which can manufacture motor vehicles at a lower cost. Whilst this provides cheaper goods for the consumer, it can come at the cost of domestic jobs.

3. Risk of Political or Economic Change

When investing abroad, particularly in developing nations, there is huge risk that is associated. For instance, there may be huge political upheaval, or a regional war. This may consist of a new government that is not so favourable to investors.

Consequently, there is an element of significant risk. With that said, those countries and regions that have been marred with instability are usually the last to be considered for investment. We only need to look at the Middle East and Africa as examples.

Nevertheless, even in many Asian countries, there is a possibility of the unknown. With rising tensions between China and Japan, there are risks of conflict as well as political uncertainty. All of which present a higher risk.

What are the 3 types of foreign direct investment?

What is FDI in simple words?

A foreign direct investment (FDI) is where an individual or business from one nation, invests in another. This could be to start a new business or invest in an existing foreign owned business.

What is FDI and its benefits?

A foreign direct investment (FDI) is where an individual or business from one nation, invests in another. This could be to start a new business or invest in an existing foreign owned business. Causes and Effects of Deflation - Deflation can be caused from a number of factors. However, it should be noted that these factors alone may not…