What is an Excise Tax

How the Excise Tax Works

What is an Excise Tax

An excise tax is a tax that is levied on certain products, usually in order to create a socially optimal outcome. For example, cigarettes, alcohol, and fuel are all types of goods that have an excise tax. Governments levy such taxes with aim of reducing consumption and thereby limit the health impact on the individual as well as society as a whole.

The excise tax is paid for by the producer, who may, in turn, pass those costs onto the customer, but must bear the burden. Often, the excise tax will lead to a combination of higher prices for the consumer and lower revenues for the producer.

The excise tax may seem similar to a sales tax, but it is different in four key ways:

It is a Unit Tax

It is a unit tax, so it is based on a specific amount per unit. For instance, the US imposes an excise on beer that ranges between $0.11 to $0.58 per gallon. By contrast, a sales tax is an ad valorem tax that is based on the final value of the product and is calculated as a percent of this.

Excise taxes are very narrow in focus and are limited to a small number of products. For example, such taxes specifically target individual products such as oil and gas, sugar, tobacco, and many others. This compares to a sales tax which is very general and broad in its focus. It is a general tax which the government applies

The general aim of excise taxes is to reduce the consumption of goods that can cause individual harm, as well as create negative externalities. For instance, alcohol can cause harm to the individual, but also others if they decide to drive. In addition, nations that operate a national health service may face a health crisis as a result of an unhealthy population. High consumption of unhealthy foods that are high in trans-fats, salt, or sugar, may result in higher demand for caridovascular treatment or many other health conditions. As a result, health services become in higher demand, leading to greater government spending on health.

Unlike sales taxes, the excise tax is already paid for by the producer of the good – so it’s already baked into the price of the good and won’t show up on your receipt.

Some examples of excise taxes include:

Governments can impose excise taxes on either the measurement of the wine, or, on its alcoholic content. For example, in the UK, government imposes a tax of £2.23 per 75cl bottle on still wines above 5.5% abv and up to 15% abv inclusive.

Most governments impose an excise tax on airline travel due to the high levels of emissions it releases into the atmosphere. There are often different bands of taxes that governments impose depending on the distance of travel. In the UK, these rates can range from £13 for a short flight, to £554 for a long first class flight.

Similarly to airlines, governments impose an excise tax on motor fuel (petrol) due to its negative effects on the environment. For example, the US imposes a tax of 18.4 cents per gallon for gasoline, and 24.4 cents per gallon on diesel.

The effects of smoking are well known in 21st century. It can lead to cancer and lung problems, but it can also create negative health effects for those who breath in second hand smoke. As a result, governments look to try and reduce consumption by imposing quite significant excise taxes on them. Again, the tax rate can be complex depending on the type of tobacco. For example, in the UK, the excise tax for cigarretes are £262.90 per 1,000 cigarettes plus 16.5% of retail price. By comparison, the rate for cigars is £327.92 per kg and hand roling tobacco is £302.34 per kg.

Biofuels are used for many various purposes ranging from diesel to the heating fuel. Each application itself has a different excise tax rate by which producers must pay. These tend to be tracked by the litre or gallon.

How the Excise Tax Works

The Excise tax is a tax on the producer, so they have to pay for each unit they produce. We can look at is as a type of fine for producing bad products such as alcohol and tobacco.

The excise tax is paid for by the producer, but often these costs are passed onto the consumer to bear the tax burden. If we take an example of a large tub of ice cream. The ice cream sells for $5 and creates a demand of 500 units. Let’s say the government wants to introduce an excise tax on it. This shifts the supply curve to the left as shown below. 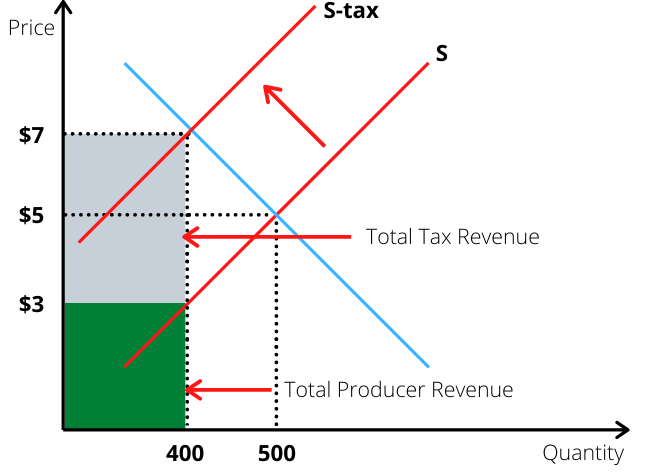 Now, the government is making $1,600 in revenue, but who is paying for it? Well, in this case, it is split evenly between the producer and the consumer. The consumer pays the excess difference between the initial price and the new price. In this case, the price of the ice cream has increased by $2. The total quantity sold is 400, so the price paid by the consumer is $2 x 400, which equals $800.

The other half of the cost is subsequently borne by the producer, which would amount to $800. 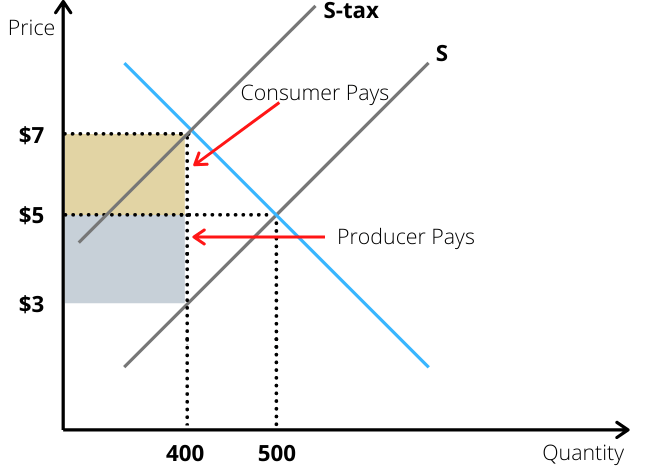 What is excise tax also called?

An excise tax is also known as a ‘sin tax’. This is because governments levy such taxes on unhealthy or unenvironmentally friendly goods such as sugary foods, salt, alcohol, tobacco, coal, gas, and oil.

Which is an example of an excise tax?

Some examples of excise tax include alcohol, tobacco, oil, gas, and coal.

What is the role of an excise tax?

The main role of an excise tax is to reduce consumption. By artificially increasing prices, consumers will decrease consumption. In addition, the tax itself is designed to combat third party effects. For instance, nations with a national health service may be unduly burdened by unhealthy individuals. By imposing higher taxes on unhealthy products such as tobacco, governments are able to recoup some of the third party effects. Deregulation Definition - Deregulation is where governments reduce the level of interference that they have in the marketplace. This involves looking at previous… … 3 Tools of Monetary Policy - There are three main tools of monetary policy - open market operations, reserve requirements, and the discount rate. These are… …